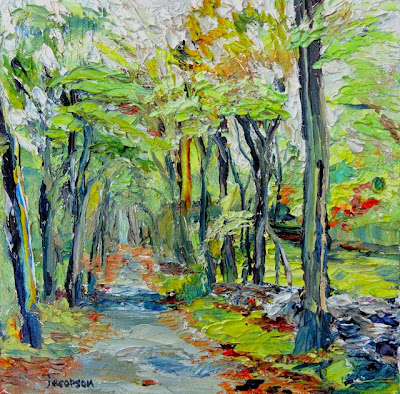 I was as lost as a person can be, 15 miles from where they live. I don't think I could find this place on a map today, but that's OK. That was the point, really.

It was getting on toward dusk, and rain was threatening when I found this little autumn lane and pulled over to paint. I doused myself with bug spray, but as evening drew closer, the mosquitoes thickened.

About an hour after I'd started painting, a big official-looking truck turned down the little road and pulled up beside me. The official-looking guys inside dropped their serious expressions when they saw me and started smiling.

They were state conservation cops, out to find people poaching deer and hunting without licenses and otherwise marauding in the wilderness. But they turned to me and said... "You know, you're supposed to have a permit for that!"

"I knew it!" I said, "I knew the art police would track me down sooner or later!"

At any rate, they were happy to see someone out innocently enjoying the woods, and we talked about painting, and Salem, and their jobs and mine, and then they turned their giant truck around and headed out.

Not 10 minutes later, the mosquitoes got so bad, I had to pick up and leave. I am still scratching today. 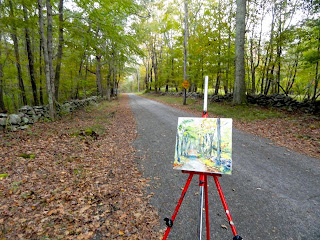 Carrie, you are just rolling them right out! Beautiful, yet again!

Thanks, Karen! For more than a year, I made a painting every day. I learned an incredible amount during that time, and while I'm not approaching that here, I am enjoying the chance to raise my productivity, and learn some new stuff. So glad you're on my blog!

Thank you, Sandeep - I think it's fun, too - I don't always remember to take a photo of the painting in the scene, but when I do, it intrigues me, as well. I appreciate your comment and your insight.

Yes, as you say it, intriguing! I'm not a painter, but I like seeing paintings, especially those capturing the nature and its beauty. When I look in those painting, I feel they depict some kind of fantasy world. And I have fantasized many times roaming around in those paintings. But it is in your blog that I've really seen the real world and the picture together. It's really contrasting. Given that the fantasy world is another dimension of my mind, to contrast the painting with the actual scene is to contrast my fantasy with the (so called) real world. Obviously, I get disturbed when my fantasy is taken away from me. It is this disturbance that, perhaps, I am getting by looking into that photo containing the painting.

You had started painting in a time of crisis. Thus painting is a way to release yourself from your reality (of crisis, etc). The photo contrasts your exit-from-reality (i.e., your painting) with the real world (i.e., the actual scene)... interesting! Have you thought of it this way?

Hi, Sandeep - I had not thought of the picture vs. reality idea as you have described it, and it is a fascinating way to look at it. Thank you!

I am so glad that the paintings and the blog take you somewhere, give you an experience. That's what I'm hoping they do for people, and so it means a great deal to me that you've told me that, and described it so beautifully.