Yellow Field - and Karma and Journaling 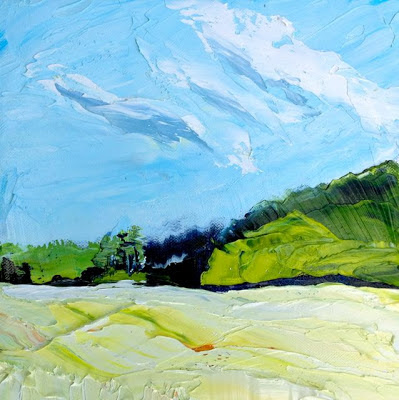 During the blazing hot show in Frederick this weekend, I was thinking about how incredible it is that people buy art from me, and from other living artists.

Every time you do that, you're doing something that 99 percent of the people in the world would never think of doing.

It is such a miracle! You're trusting yourself, your own eyes, your own soul, your own heart, to know that you like a piece of art - and then you take the huge leap of giving me - or another living artist - your hard-earned money and making it possible for us to continue to make art.

Most people never, ever do this. So if you have, congratulate yourself! You are a person among persons, a rarity, a treasure. 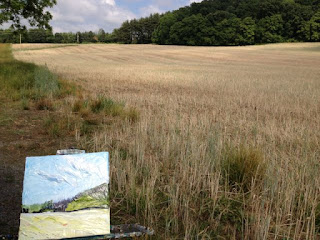 My painting in the landscape
***
On Sunday in Frederick, sales were still slow. Then a woman from the Frederick Arts Council came around, asking for a donation of art for an auction. She was very nice, said I didn't have to donate, was under no obligation, etc. But I decided to donate a piece, even though, at that point, I was losing money on the show.

Within five minutes of my making the donation, a woman came into the tent and bought the tall sunflowers piece. Moments later, another sale. And later in the day, still another. Karma?

***
PART OF THE PROSPERITY COACHING that Joe Skelly is doing with me involves keeping a journal. Joe told me about a journaling retreat that might interest some of you!

The retreat involves learning the basics of starting and using art materials in your journal, and exploring your creativity to express your soul, your hopes and your dreams.

The retreat is being put on by a couple of men who call themselves the Journal Junkies. They have a blog and have written several books about their journaling ideas.

The retreat takes place June 20-23, at the Embassy Suites Dulles-North in Ashburn, VA, near Dulles Airport. For more info, click here to check out their blog about the retreat. 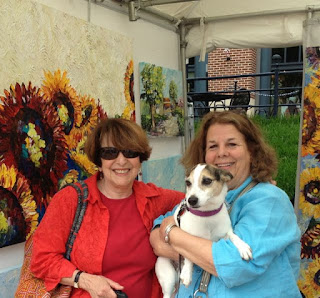 I looked up during the show in Frederick and lo and behold, worlds collided. Standing in front of me was my friend Linda Fite. Linda is an amazing artist, a collector of my paintings, and a sponsor of the Tubac trip. And we worked together at the Times Herald-Record in Middletown, NY. That was the last place I saw her.  And then, suddenly, there she was in Maryland! She was visiting a friend in West Virginia, and Frederick is not too far from there - and so they came to the show.

And they brought the Dog of the Day! 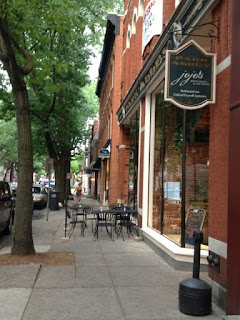 And here I thought Jojo was at home, guarding Peter, when all the time, she was
starting her own business in Frederick. 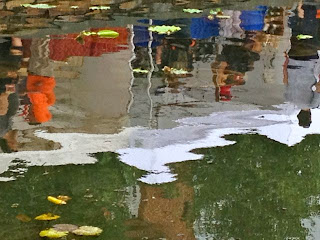 Reflections on the creek where the show took place in Frederick.
***

OOOh, try painting the reflections on the pond...love to see how the paints collide...or is that simply my tendency toward smearing paints to be rewarded with marvelous color, no picture, just colors?

Absolutely! That was my thought in taking the photo

Ok, double ditto. When paints collide, worlds collide and friends reunite. and about the Karma, I think it's about giving and expecting nothing in return. Namaste, Carrie.

Absolutely, Manjacita! Expecting nothing, and being grateful. And I am so, so grateful.