Fried Clams! ...And How Hubris Nearly Got Me Arrested 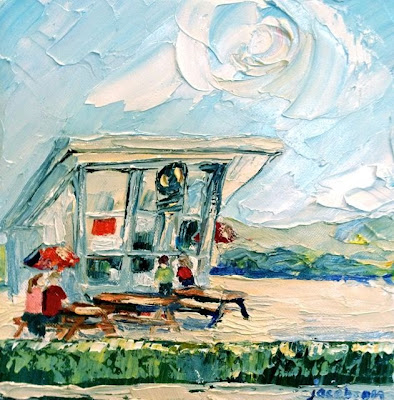 If you've lived in southeastern Connecticut, you know about the clam shacks that open every summer.

They're not healthy, they're (for the most part) not cheap - but Who Cares? They offer delicious summertime treats, the stuff you used to love as a kid and, face it, you still love - foot-long cheese dogs, chili fries, fried clams and scallop dinners.

This painting is of the Sea Swirl, Mystic's clam shack (try the chili dogs!).

Below is a scallop dinner I got recently at Fred's, in New London - Famous since 1972! Can you believe Fred's has a website? Click here to check it out. 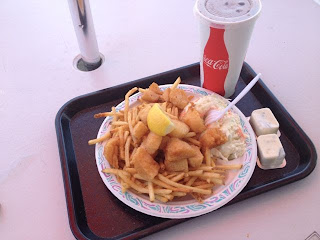 ***
I PROMISED MYSELF at the outset that I would keep this blog honest and true, no matter what. So... at the Mystic Outdoor Art Festival, I've always been at the corner of Willow and Main. Also at the corner is a business, and right beside that, heading down the street, is a house whose owners hate the art show.

They put tripods of sticks in their driveway, then run No Tresspassing yellow crime tape around their lot and driveway, and they somehow have convinced the police to put temporary No Parking signs along the parking spaces beside an empty field that's just across their driveway and, for all I know, belongs to them.

On Saturday, I parked legally behind all of this stuff. But three cars parked illegally by the empty field, and someone took down the signs.

On Sunday, I decided to do the same. Well, the people were watching, and they called the cops on me. The officer who accosted me was not pleasant at all. I apologized (not having the nerve to say - What do you mean? I did no such thing) - and moved my van, and gave him back his sign. He promised to get the show organizers to ban me from the show next year.

It was an altogether unpleasant interlude. And it was all my fault. I was mad at how nasty those homeowners are, year after year. But mostly, I felt entitled. Other people had parked there, so I should be able to park there.

But as my mother always told me, two wrongs don't make a right. So, I am chagrined and embarrassed. I don't usually do stuff like this... but this whole incident made me remember why.

***
WELL, IN MY ONGOING journey of discovery, I had one of my minimalist paintings framed.
What do you think? I'm honestly not crazy about it - but I'm not crazy about frames in general. I'd love to hear your responses... 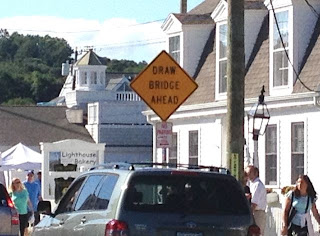 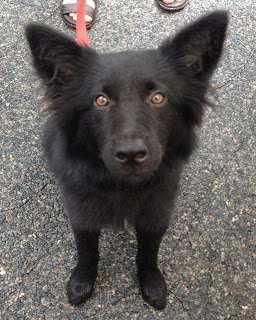 Carrie
Continue to follow your progress. I am amazed and enthralled. Gotta love your heart.

About the frame. I find the color and width distracting from the painting. My (underscore) eyes want to look at the frame. Do you suppose a narrower and even gray would be better? Just a thought.

Also for a smaller knife, have you tried the smaller side of a credit card?

Have a beautiful day and don't stop painting or writing.

There are some nasty people around...nothing in life makes them happy...and their nastiness spills over to affect others. The incident probably affected your show, and that's too bad.
On another note...I LOVE your framed painting. I think the frame really makes it pop.

Yes, indeed, there are. My booth at another show, Wickford, is also in close proximity to people who are just plain nasty.

I tried hard to keep the incident from affecting my show. I have realized that if my head is in a bad place - no matter how incidental it might seem - it truly affects my show, so I am working hard to recognize WHEN I am in a bad place, and then get myself out of that place... very insightful of you.

Hope you are well. What's going on in your life, and in the far northland? I want to go to Canada again! Soon!