Room at the Counter - and the Passing of Puffy's Sister 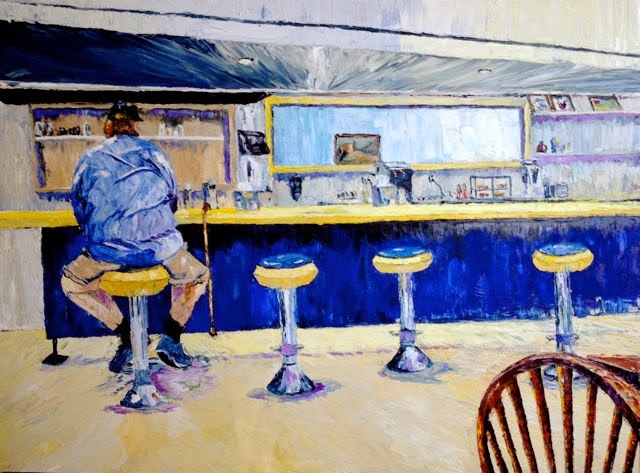 I've become really interested in painting people, as those of you who follow this blog know. After a couple more commissions, I'm going to start the portrait project that I wrote about a while ago.

The American Moments idea is an adjunct to that. Another person-related series, it began with "July 7."  "Room at the Counter" is the second of the series of paintings of small moments, the scenes that we see every day, and that give shape and color to our lives.

Who hasn't seen that guy at the diner? He's alone, he doesn't have a book or a magazine with him. He's just waiting for his breakfast, as he has done every day for the past who knows how many years. He's young enough to wear shorts, and have a full head of hair, but life - and diner breakfasts, no doubt - have gotten him to the point where he can't get around without the cane.

For the past few years, I've been taking photos of little scenes like these. I hadn't known what they were for, but now, I'm pretty sure they're for this project.

I have no idea whether I can do these paintings well. I don't know if they will be appealing to people, or whether they will sell. But I feel a real need to do them, and so we shall see. What do you think? 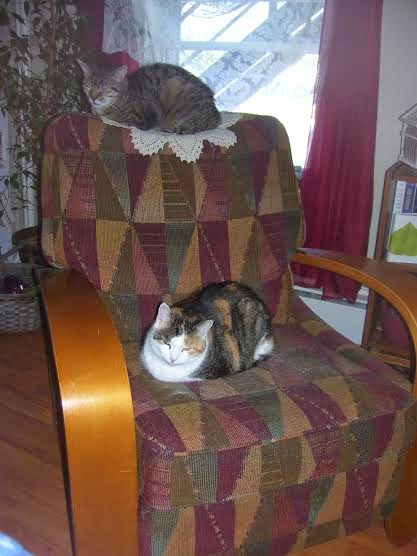 About 15 years ago, we adopted a nearly feral cat named Samantha. She was not spayed, but we promised the shelter we would spay her. A few days after we got her, we moved to Maine. A week or so later, Samantha got out. We had a devil of a time getting her back in, but eventually, we got a Have-A-Heart trap, and captured her.

But during her brief outing, she got knocked up by a neighborhood Tom. She had four kittens, which we named Puffy, Tuffy, Snuffy and Scruffy. We kept Puffy, and gave the other three to friends.

One, shown in the top photo, was taken by Liz, an editor at the paper where I worked. Liz named her "Kizzy," and though she'd been a little hesitant to take her, she fell in love with the kitten.

Kizzy died recently, after a long, happy life. Liz said she was a great cat, who helped her through good times and tough times. She was much loved.

Puffy and Samantha are both going strong. Here's Puffy, below. I think she still looks like a kitten. 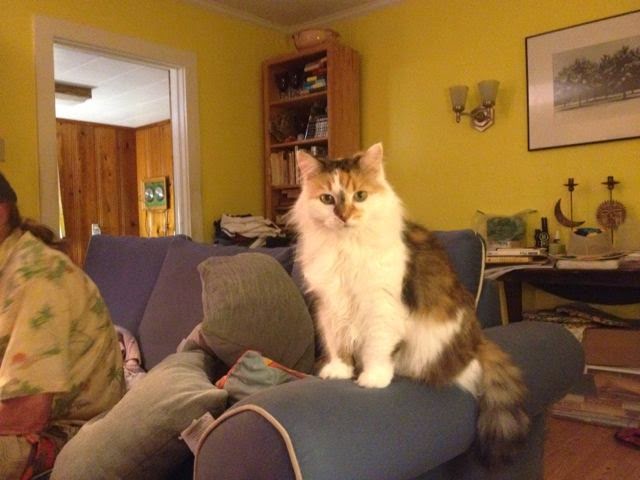 I started taking photos years ago with intention of painting a Homeland America series. To date I have only painted one, but for same reasons.... will people like them and will they sell ?
I say " carry on" .... they must want to be paintings whether they sell or not so just do it

I think your people series is a great idea and I quite like the paintings you have shown so far. That's really saying something, because my house is filled with art...and the whole lot of paintings contains not one person! I'm wondering if that says something about me? hmmm. Might be time to change that!

Hi, Sara - I'm glad you like the idea and the paintings. I've never been too fond of paintings of people, either, because I always felt they were people I didn't know. I'm trying to make these people either vague enough or universal enough so that we all will feel they are people we do know, situations we have been in. I am not sure I have the chops to do this, but I feel so strongly about it that I think it must be time to try.

Hey, Bon, you're the third artist to say just about the same thing to me. So I guess I will give it a try, and we'll see what happens!