Hitting the Slopes - and Gallery News 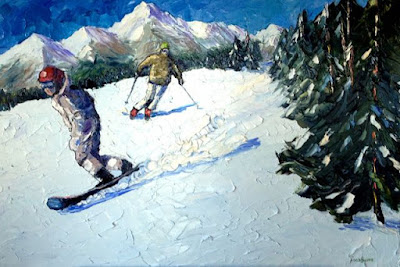 When Lori at Center Framing and Art (56 LaSalle Road, West Hartford Center, CT) suggested I paint a snowboarder and a skier in action on a slope, I was interested and a little scared. I've never painted anyone skiing - or running, jumping, skating, swimming - and on and on. But she was sure I could do it, and I do know how to ski, and of course, that helps.

So I set off to make this painting, and I have to say, I really love it. Of course, it's a mile from the abstract-y paintings I was experimenting with last week - but there's no rule saying you can't experiment in a couple directions at the same time.

***
BIG GALLERY NEWS! The Jack Richardson Gallery, in nearby Onancock, is now representing me, here on the Eastern Shore.

Jack is a painter himself, and has a nice gallery on a small street in Onancock, a pretty village just up the road. He represents a few painters, and it feels like I've found a pleasant home for my work on the Shore.

That's not all the gallery news, either. Center Framing and Art, in West Hartford Center, will be moving in January from the space it's occupied for 42 years. The person who owns that building, and several others in the area, is going to make them into a condo, so Center Frame has to go. Lori, who runs the gallery, has found a new home just around the corner, on Farmington Avenue (next to Max's Oyster). The new place has better parking, and good visibility - so she's excited, and I am, too! 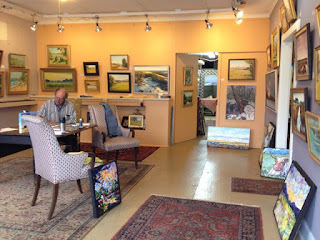 Above, Jack Richardson in his gallery. Below, "Route 13 Barns," (one of my paintings) takes center stage in its new home. 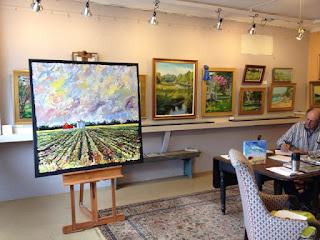 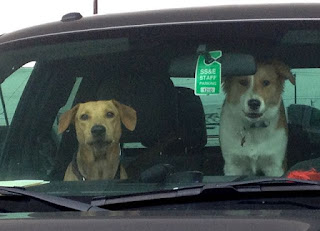 These two were defending their car, in Jerrell, Texas.

"No great artist ever sees things as they really are.
If he did, he would cease to be an artist."