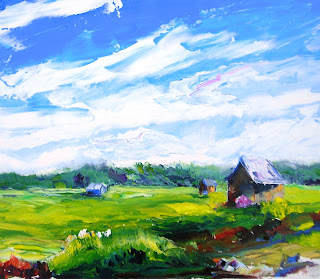 Roof Lines of Le Gaspesie
Oil on canvas, 16x20
sold
One of the things that made the Gaspe different from the rest of the parts of Canada that we saw was that the bottom edges of the roofs of many of the buildings curved upwards, like the old flip hairdos of the 1960s and '70s (think Laura Petri).

I can't imagine what purpose this roofline serves, other than to be pretty and graceful. It would seem to me that snow and rain would gather in that curve, and freeze or seep or rust.

No matter. The houses are lovely with their lilting roofs. They sit often at individual angles on their lots, facing the sea, or facing the fields, or facing whatever pleased their builders. Surely there is zoning, but it's not the rigid set of laws we know as zoning.

I painted this on a very windy day in St. Ulric, just beside a frite shop. The shop and the parking area where I stood are owned by the people who own the hotel just across the way. I asked permission, and the wife gave it immediately, but then called her husband, who had to think a little before he said yes.

I held tight to the easel and tight to the canvas as I painted. Heather had some trouble with her watercolors and her paper, and ended up not liking her painting. But I like this one, the big building and the small one, both with the curved roofs.

When I finished, I bought an order of frites (french fries) for lunch, partly as a small payment for the generosity of the owners... and partly because I was hungry. And the frites were delicious!
By carrie jacobson - June 28, 2010

What a wonderful painting - you can feel the wind tearing through!

Thank you so much, Liz! I'm home now, still not unpacked, but working on it - and enjoying being here, but still missing being there