Path by the River 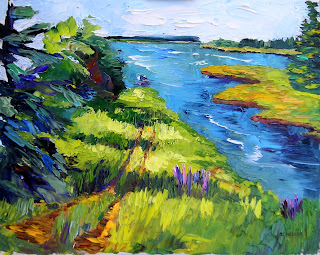 Path by the River
Near Kensington, Prince Edward Island
Oil on canvas, 16x20, $350
Please contact me if you want to buy this painting
It was afternoon, and we'd been looking for a spot to paint for a while. I have learned to become somewhat arbitrary about this. There is always a hill to go over, or a curve to go around. There is always another thing to see that might be better than what you're seeing. So, while I look for something wonderful, and I am always tempted to look for something perfect, I've learned to be content with something that's good enough, and safe enough.

We were in that sort of spot, looking for the good-enough, when we found this bright and shadowy trail down to a little stream with a boat in it. It was astonishingly beautiful. It was perfect.

Heather painted on the bridge going over the stream (she didn't like the painting she made, so it's not on the blog today) while I painted at the tip of the path.

In a while, a man from across the street came over with his young daughter, who wanted to see what we were doing. The daughter pointed out the lighthouse that her dad had built in their yard. It was maybe 20 feet tall, and looked a lot like a lighthouse in the final stages of building.

The dad told me that, when he was young, he could easily row a boat in this stream, but now, because of the runoff from the potato fields - one ton a year per acre, I think he said - it was impossible. He blamed Cavendish Agri Services, an industry that seems to own the nearby town of Kensington.

After a while, they left, and in a while, a truck stopped and a man in his 60s and a girl in her 20s got out. I figured they were father and daughter, probably, though you never know. The man was sturdy and strong, the girl willowy, with a mass of wavy red hair that made me think of how mine was before I started to get gray.

They loved this painting, and talked about the area. I asked about Cavendish, and the man, a retired carpenter, shrugged. The company employs pretty much everyone around there, he said, and so he felt it balanced out.

Then he told me about his lighthouse. It's on a piece of land he owns about a mile up the road (his house was very close to where we were standing), and he has a cabin on this land, and has built this lighthouse. Did we want to see it? He would go and open the gate if we did.

So when we finished painting, we went to see the lighthouse.

It was an absolutely extraordinary building, three stories high, with a deck at the top and a deck at the bottom. It's beautifully shingled, and set on just the right place on the land. It's a masterpiece of building - and is furnished inside - and has running water and a bathroom. We could not get in, but we peeked in the windows. 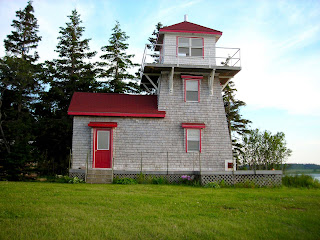 thanks so much, Sandy. Great to know you're still checking in! Hope all is well with you in your lovely home there in the pine lands.