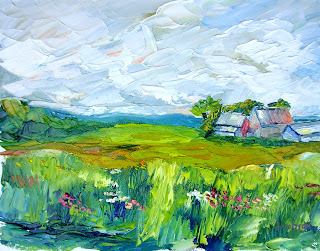 Arnold's Barns
Melville, Nova Scotia
By Carrie Jacobson
Oil on canvas, 16x20
Call me at 860-442-0246 or email me at carrieBjacobson@gmail.com
if you are interested in buying this painting 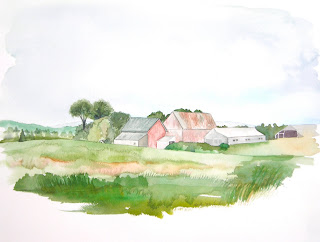 Arnold's Barns
By Heather MacLeod
Watercolor on Arches paper, 12x16
Canada is an enormous country, way larger than the U.S. You could drop two or three New Englands in most of the provinces and still have room for a few Delawares or Rhode Islands.
And there are not so many people in most of those provinces.
Yet here, in Atlantic Canada, there are plenty of roads, and plenty of roadwork. The little towns look neat and well-kept, if not prosperous. There are empty storefronts, but generally these are in the minority. Houses are painted, there’s no trash in the roadways. Here and there, you see a yard with junk in it, but that’s pretty rare.
Canadians, judging from what we’ve seen on this trip, are fanatical about keeping their lawns mowed - and their lawns are huge. You almost never see an unkempt or overgrown lawn.
Gardens are spare here. I’ve seen very few elaborate plantings. On the other hand, the wild lupines and phlox that grow in the fields and ditches are just spectacular. And the growing season seems condensed. We’ve seen tulips, lilacs and poppies all growing together. At home, these would be blooming separately over two or three months.
We lived in Canada for a winter when I was 14. Dad was on sabbatical, and was a ski fanatic - we all were - and so we came up here and rented a house for a winter on the grounds of Le Chantecler, a ski area in Ste. Adele, an hour or so north of Montreal.
Mom and Dad skied all day while Rand and I went to school, and Laurie went, I think, to daycare. I grew to love Canada, and still do. Today, though, talking to Heather, I realized that I really don’t know much about Canada. Where is the wealth? What are the industries? What does land cost? How are the taxes? What is the political scene? It has been a marvelous couple of weeks here, and we have met wonderful people (more on them, soon) - but clearly, I need to educate myself.
By carrie jacobson - June 29, 2010