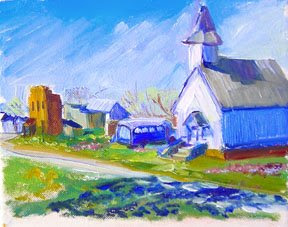 Sun City, Kansas. Oil on stretched canvas, 8x10. sold
A couple evenings ago, I went out to explore Pratt, Kansas. I turned off the main road onto a dirt side road and saw a couple doing something with a big yellow dog. At first, I thought they were having trouble with the dog, trying to get him into the truck or something, and so I stopped. Turns out they were just exercising Duke. They drive along the dirt road and Duke runs.

They were delightful, friendly people. I admit, my sievelike memory has dropped their names already, but he is a retired train engineer, and she makes porcelain dolls. We talked for a long time, and when they heard what I was doing, they suggested I visit Sun City.

And so, in the morning, I did. I drove along paved side roads, and soon enough, found myself leaving the wheatfields and arriving in red-dirt hills. I rounded a corner, and there I was, on the main street of Sun City.

At one time, in the 1880s, it was a bustling, busy place. You can read about it - and see two photos of the church I decided to paint, by clicking here) .

Now, it's a ghost town. Fewer than 100 people live there. The post office is running, as is Buster's, which is supposed to cook great burgers (it was barely 10 a.m. when I finished up, so no burger for me). But most of the buildings are empty. Pretty houses stand vacant. Businesses are shuttered. I could have set up my easel in the middle of the street. It makes you wonder.
By carrie jacobson - April 23, 2009

ooopps! This one stayed small. Really cute though! :-D


I really would one day visit this town, even if it's abandoned.
But the way you describe such place, it's so lively.

Hi, Sandy and Greenleaf, and thank you for your comments! I guess I don't have the size thing figured out, though I'm getting a clue. So we'll see. I will experiment when I'm at home - And Greenleaf, thanks for your nice comment, too. I hope you get a chance to visit Sun City - it's really alluring and mysterious. I could see myself living there.