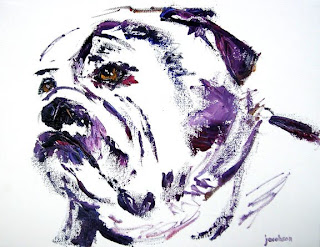 Bert. Not for sale.

I spent Saturday standing on the sidewalk in front of Center Framing & Art in West Hartford, painting dogs and talking to people who love dogs. It was a great day - but I'm beat. I'm planning on going in to the house and sleeping like a dog.

I was joined, early on, by my brother Rand and his daughter Larkin. Rand was the one who connected me with Center Framing, and I am eternally grateful, and today was an excellent example of why. I painted, I talked with dozens of people, and they couldn't have been friendlier or more supportive. And they all love dogs.

Of course, I worry somewhat that I'll end up categorized as a dog painter, but you know, if that's the downside of success, I'll take it.

So Rand and Larkin brought me a picture of Bert, their now-aged bulldog, and Rand suggested I try the minimal approach, since these days, Bert is very white in the face. I don't think I'd have gotten that idea by myself. Making these minimal paintings always sets up a little whir of nerves in me - as Rand pointed out, one wrong stroke and you're doomed.

Email ThisBlogThis!Share to TwitterShare to FacebookShare to Pinterest
Labels: Bert