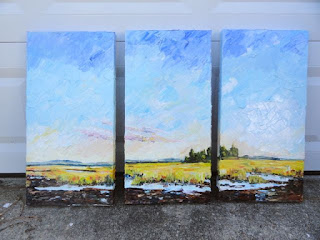 Give me half an entry, and I will shove my foot in the door and talk about my paintings. If I have paint all over me and you ask me if I'm a painter, I will be off and running.

Last year, when I was staying at the little hotel in town, and unloading a painting of the salt marsh, a man staying at the hotel asked if I was a painter. I showed him the piece, and he loved it, so I gave him my card and told him my story. 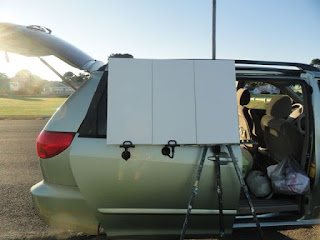 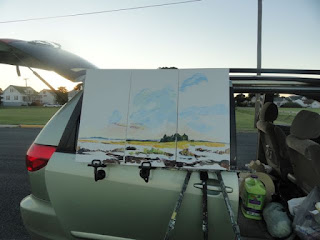 It was pretty windy, and one of the gizmos was not working right, but eventually, I got it all set up.

It was a lovely sunset, too! The air was clear and blue, with pink clouds and gold near the horizon. The water shone. About a billion gulls had gathered on the mud, and though I didn't paint them in, I liked watching them. There are regular gulls here, and also laughing gulls, and honestly, it's not a misnomer. It sounds like they're laughing!

I finished the painting yesterday, on my studio easel and my plein air easel, and ended the day covered with paint, which I then got all over the car, the garage, Peter and my friend Pat. But I ended the day also with a painting that I absolutely love.


***
It is Sept. 11, and the early sky promises a blue not unlike the blue of 11 years ago. I say a prayer this morning for the families and the friends of all who perished in the Twin Towers, and hope that they have found their way back into lives that are meaningful and sweet to them.

Email ThisBlogThis!Share to TwitterShare to FacebookShare to Pinterest
Labels: book

What a great idea! I bet you could sell something like this as part of your commando plein aire painting kit. Love the triptych by the way and congrats on the commission!!

as always, your work is, beautiful

Looks like a stunning painting. Love the blue of the sky.

Thanks, Susan! It really is a stunning painting. I absolutely adore it. Glad to have you aboard!