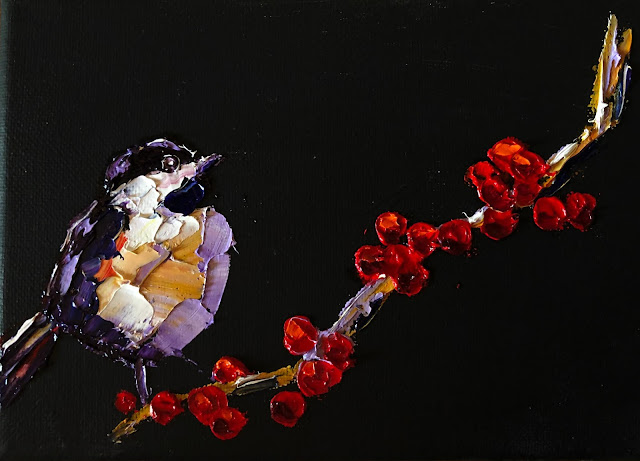 THE LITTLE BIRDS - the chickadees and wrens, the sparrows and titmice, the little brown and gray guys - the little birds seem cheery, going about their business without bustle or fuss.

I know this is me anthropomorphizing, but I do watch them, I do pay attention, and really, the little birds have their quiet ways. Some flit up to the feeders and eat there, but most eat on the ground, feasting on seeds the bigger birds toss aside.

They flit and perch, shake their mundane feathers, tip their often drab heads and stay mostly in the background, as important as all the others, but staying quiet about it.

"Little flocks of Black-capped Chickadees enliven the winter woods with their active behavior and their cheery-sounding chick-a-dee callnotes as they fly from tree to tree, often accompanied by an assortment of nuthatches, creepers, kinglets, and other birds. This is a very popular bird across the northern United States and southern Canada, always welcomed at bird feeders, where it may take sunflower seeds one at time and fly away to stuff them into bark crevices. "


- From the Audubon Guide to North American Birds