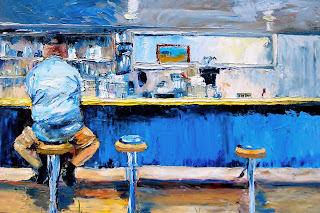 At the Diner
Oil on canvas, 24x36
Please email me for price and delivery information
We were going in to eat at this very same diner on a recent sweltering morning when I saw a car parked with a dog in it.

The windows were cracked open, but the car was in the direct sun. It was already 86 degrees and getting hotter by the second.

"Who owns the car with the dog in it?" I asked, loudly, when I got into the diner.

OK, I thought, either do it or don't, but decide.

"Yes, it is," I said. "It's everyone's business. That dog is going to get sick or die if you don't get him out of there."

"He's my damn dog, and he's fine," the guy said. His wife and young daughter said nothing. They had clearly just arrived, and were studying the menus. It would be a long time before that dog was safe.

By this time, we were seated, and I was crying. I hate this, but it happens to me, and there's nothing I can do to stop it.

"I'm going to call the police," I said to Peter.

The guy overheard. "You want to call the police, call the damn police."

I called the police, and we left.  I wish I had done more. I wish I'd stayed until the cops came. I wish I had taken the poor dog for a walk. But at least I did something.
By carrie jacobson - August 04, 2010

Email ThisBlogThis!Share to TwitterShare to FacebookShare to Pinterest
Labels: At the Diner

I had been trying to comment on this painting on the Palette Knife Painters blog but for some reason it wouldn't recognize me nor my comment so I decided to head on over to your blog. I really love this painting and wanted to let you know, then I was so moved by reading your story of trying to do something about the dog in the hot car outside the diner. How can people be like that, I cannot understand? I hope that poor dog is ok and kudos to you for having the guts to do something. This painting is wonderful.

I can't believe this guy had absolutely no conscience...and if you abuse animals...they usually treat family like that too. (poor children & spouse). You did the right thing by calling the cops.

Thanks, Roxanne. It's always great to get support from other animal lovers. I was pleased, too, that the cop took me seriously.

Hey, Ann, thanks for the note. I am so glad my story moved you. I can't understand what motivates people to such meanness. Take care!