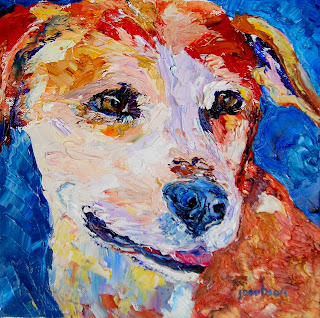 Bonesy
Oil on canvas, 12x12
commission
Last Monday, I was weeding the garden when I dislodged the very edge of a yellow-jacket nest.

I pulled up the weed, a couple yellow jackets flew out (terrifyingly, they nest in the ground), and stung me on the wrist. It hurt like blazes. They're mean, vicious, and they don't die when they sting. They just keep on stinging. I flung off my gardening glove and leapt away from the garden, and escaped with two stings.

I ran my wrist under frigid water.

By Wednesday, my hand was swollen, and the bulging was stretching my skin tight, nearly to my elbow. I couldn't type. I couldn't grasp. I couldn't paint. It was like having an alien inside my arm.

The next day, the red streak - about 4 inches across - had reached nearly to my elbow. The swelling had torn the skin open where I'd scratched. My arm was the size of a pork loin. It made me think of the pictures of people with elephantiasis that my brother and I used to goggle over when we were children.

I went to another doctor.

She took one look at my arm, prescribed antibiotics, and told me that if I'd waited another day, I'd have been in the hospital.

By Friday, the swelling was down. By Saturday, the redness was receding. By Sunday, I could twist the lid off a bottle, and I could hold a paintbrush.

Email ThisBlogThis!Share to TwitterShare to FacebookShare to Pinterest
Labels: Bonesy

That first doctor was a moron. I don't know if you've ever gotten yellow jacket stings before, but I can tell you my first one put me into shock. I was stung on the palm of my hand - it felt like a hammer blow - and within 15 minutes I couldn't stay awake. I slept for 12 hours (after taking some benedryl) and like you. my entire arm swelled and itched like the devil.

In subsequent years, I've been stung again with just as much pain but less reaction. Three years ago I was stung seven or eight times all over my back, neck and face. Benedryl really helps with the itching and swelling, but it does make me really sleepy...

Oh - and Bonesy is brilliant!

Wonderful Bonesy! And what an experience. My personal opinion is that we know our bodies far better than any doctor will! Glad the arm is better.

Thanks, Liz! What an experience, indeed. Doctors can be stubborn, can't they? This guy just didn't get it. And yes, we do know our own bodies, thank heavens.

Hey, Patrice, thanks for the note. The first doctor was indeed a moron. Thank you, too, for sharing your story. I did have terrible trouble staying awake, too. I was taking Benedryl, and thought it was that, but it was like I'd been hit by a board. I was just OUT.