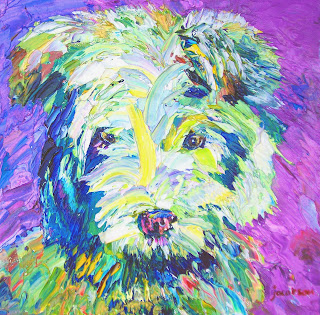 A few weeks ago, my sister-in-law, Sue Jacobson, adopted a beautiful mixed-breed dog named Frankie. Frankie is a cross between a cocker spaniel and an Australian shepherd. She has a chestnut coat and lovely ice-blue eyes, and she's a sweetheart.

Frankie came from Texas, in a big, air-conditioned truck with other southern dogs being adopted by people in New England.

Brewster showed up during Sue's search for Frankie. His page on Adopt-A-Pet  (http://www.adoptapet.com/pet4229680.html) says he's in Glastonbury, Conn., but I think he's another southern guy. He is part Wheaten terrier and part chow. He has a blue tongue, and in all his photos, that left ear comes forward over his face. In the past couple weeks, they've shaved him down. Wherever he is, Glastonbury or the South, it must be hot!

I am going to track him down and, as a part of the Art for Shelter Animals Project,  donate this painting to his rescue group or to the person who eventually adopts him. I will let the rescue group make the decision. I'd love to adopt him, but we have too many dogs as it is.

A last note: Sue said that going to meet the truck was like going to meet family who had been away for years. She pulled up into the parking lot, and there were people and dogs and hugs and smiles and laughter, and she burst into tears, it was so moving and so full of love and life.
By carrie jacobson - August 29, 2010

Email ThisBlogThis!Share to TwitterShare to FacebookShare to Pinterest
Labels: Brewster