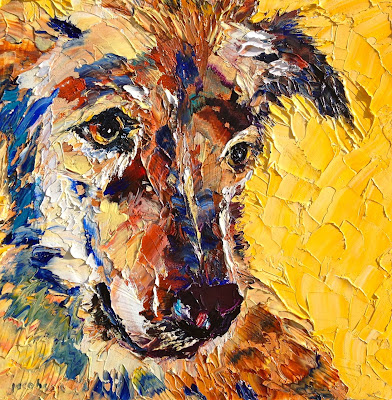 It was warm enough today, and bug-free enough, that we left the back door open so the dogs could go in and out at will, for the first time in their lives.

Clearly, it was liberation for them, and they spent hours running in and out - just because they could. Then Smokey sat in the sun in the open doorway, while Jojo lay in the sun in the yard, and we all soaked it up like the miracle it was.

Earlier in the day, when the door had still been closed, I'd heard the dogs doing something, again and again, making some metal on metal noise. I looked out of the open door of the boat-garage studio where I was painting, and though I couldn't see what they were doing, I thought it might have something to do with the gates, and a potential escape, so I took them inside.

When I came back out, I heard the noise again, and realized where it was coming from - the rusty 40-foot-tall antenna that the previous owner installed, and which towers frighteningly over our house. It's footed in a block of cement, and probably is stable, but still, it looks terrible, and if it ever toppled, would cause all sorts of trouble.

The noise, I realized, was caused by a bird, probably a crow, tossing pecans down inside the antenna, probably in an effort to break them.

Or maybe, just maybe, he did it just because he could.