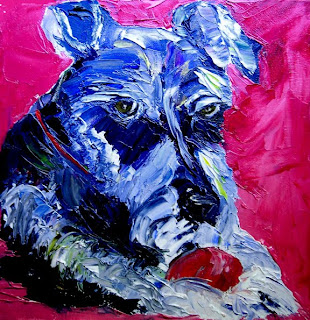 Miniature schnauzer. Contact Sandy at Center Framing & Art in West Hartford, Conn., for price and shipping information.
Yesterday, Kaja, our big red German shepherd/chow, lurched and wobbled toward me, a look of terror in her eyes. I got her to lie down, and she had a series of strokes and/or seizures while I held her. Her eyes rolled, her tongue lolled out, and she shook and went rigid, again and again.

Between events, she stared at me, pleading for me to make this stop. All I could do was hold her and stroke her and tell her what a good girl she is.

I couldn't get Peter on the phone for what felt like an eternity. He had the van, and I had the Miata, and while I could have lifted our 75-pound dog, the Miata could not have held her wracking tremors.

By the time he got home, the seizures had finished, and she was panting and spent, but able to stand a wobbly stand. We took her to our veterinarian, and he looked her over, drew blood, told us to take her home and keep her quiet, that she was going to be fine.

Today, she's better. She's tired, and she's still wobbly. Her arthritis, which has been a problem for a while, is taking more of a toll on her. But her glee showed up a few times on her face today, and she's been as barky and loud as usual.

This dog has been a true and noble friend for 13 years. She's the smartest dog I've ever known, and the most noble. She loved me from the moment she laid eyes on me, and would destroy anyone who tried to hurt me. She has greeted me, wagging and loving, every morning since we adopted her from a shelter in Maryland.

Kaja is the model for the Kaja in the fictional piece I'm writing for the Zest of Orange, a weekly newspaper by a group of writers and editors who worked at the Times Herald-Record. In the story, Kaja is strong and smart and noble and heroic. The fictional dog is nothing compared to the real thing. 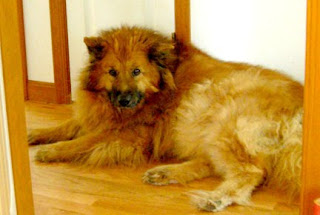 That breaks my heart, Carrie. Here's hoping for the best.

Thanks, David. She seems good today, and you know what, I am not giving up on her. She wouldn't give up on me! I'm going to make her get some exercise, get those legs stronger, try every remedy that's suggested, and who knows? A friend told me her 12-year-old dog had a similar horrible stroke/seizure episode, and she was going to have the dog euthanized, but the vet said hold on, she's not in pain, let's see. The dog lived five more good years.