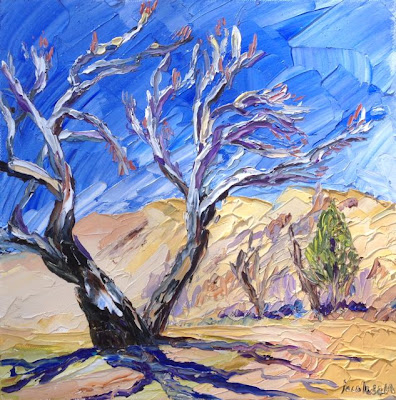 The show in Tucson was a smashing success for me! I sold six paintings, for a total of about $2,400. That's not my best show ever, but it is up there with my best shows.

I was one of only a very few painters in the street fair, which truly was a street fair. In addition to food vendors selling turkey legs, corn on the cob, chili cheese fries, Chinese food, Hawaiian chicken and more, artists and artisans were selling jewelry, sculpture, hats, jams and jellies, tie-dyed T-shirts, blown glass and marbles, photographs and who knows what else - that was just the people near me.

All three days were bright and sunny and hot. Two paintings sold on Friday, none on Saturday and four on Sunday. The people who came to the fair - and there were tons of them! - were pleasant, polite, friendly and restored the faith in art-fair-goers that my experiences in Florida had pretty much destroyed.

So this was an excellent show for me, and fun, too!

On Monday, Dad and I had the chance to paint together again, while Paula played in a big golf tournament, coming in second. Dad and I drove through the funky/artsy little town of Patagonia, up a winding road that turned to dirt eventually, and ended at what was the town of Harshaw. Now, it is pretty much just a crumbling brick building and a turn off the road.

Dad painted the building, and painted an Arizona sycamore, an amazing kind of tree, with trunk that is dark near the ground, but, higher, its trunk and branches are white - and curving, twisty and gnarled, as well. I don't usually make paintings of trees, but this one was spectacular - and a challenge. 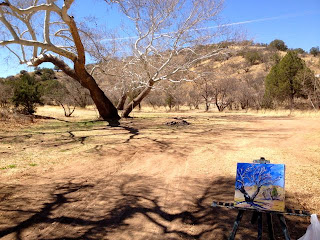 Scenes from the Days 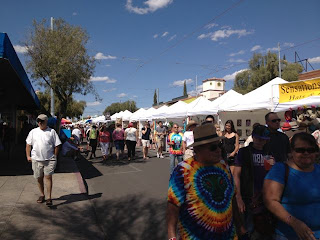 Here's a view of the street fair, up the road from my tent. 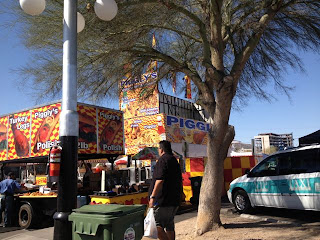 I was lucky enough to be near the amusingly named Piggly's, which sold fries, chili cheese fries, enormous turkey legs and more. I didn't eat there, but had fun watching people devour turkey legs! 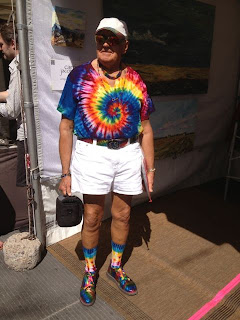 Here's Ted, who visited my booth twice during the show. Ted has only one eye, but says he can see fine. His mission in life is to bring a smile and joy to people, he says. He told me he isn't afraid of dying because his wife is already dead, and he is looking forward to meeting him in Heaven. I asked if he dressed like this when his wife was alive, and he said - Yes! Even more so! 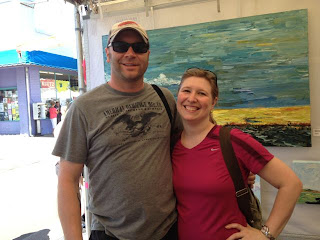 Here are the Knaacks, who bought one of my paintings - the first sale of the show! 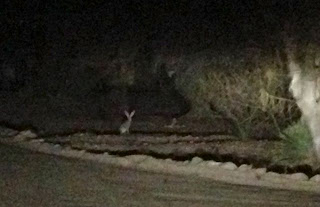 A jackrabbit in my dad's yard one night. 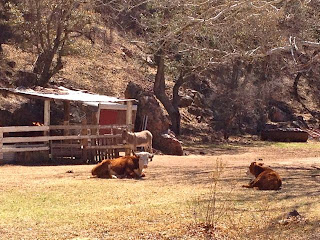 Cows and a burro on the way to Harshaw. 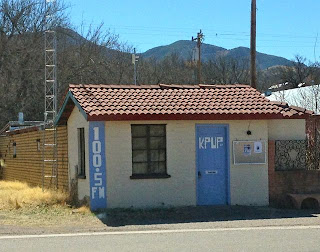 I almost put this in as the Dog of the Day... Patagonia's radio station. 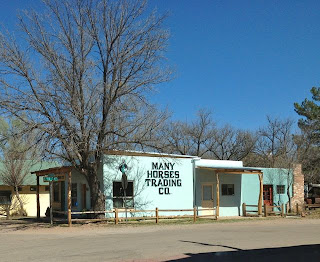 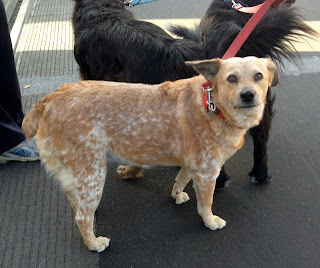 Dog of the Day! This one is named Pima, and was a rescue from the Pima Animal Shelter.