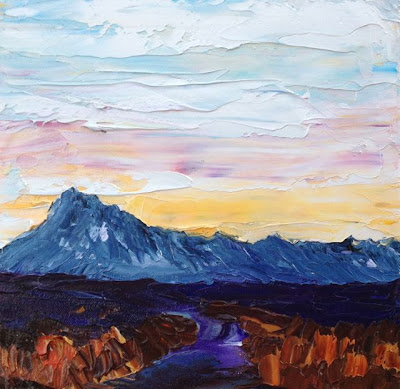 As I write this, the start of the show in Tucson is just hours off. I set up yesterday, and am excited about it and happy to be doing a show in such a foreign place!
On Thursday, I visited a Rhode Island friend who now lives in Tucson. It was such fun! We talked and laughed and went out to supper. Vietnamese food is my new favorite, thanks to Eric and Mary Bryson, so Diane and I had Vietnamese, and it was delicious!
She has hurt her eye somehow, and has to wear an eyepatch for the next several months, so it was like visiting a pirate. I should bring her a parrot!
Tucson seems big and exotic, with gigantic, craggy mountains looming behind palm trees. There is tons of shopping, tons of construction and tons of traffic. It's been a while since I've been in a city of any kind!
The show is taking place in what looks like a total hippie neighborhood. From my spot, I can see a store with faces of Jimi Hendrix, Jim Morrison, Jerry Garcia and others spray-painted on the side.
The show is gigantic! The landscape without my painting in it! 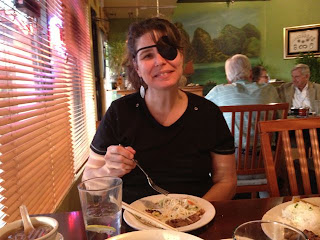 My friend Diane the pirate, at a Vietnamese restaurant. She has hurt her eye
and has to wear the patch for a few months. 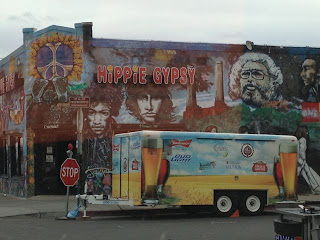 My booth is right up the street from this store. The whole neighborhood
is very much a hippie neighborhood. Wow! 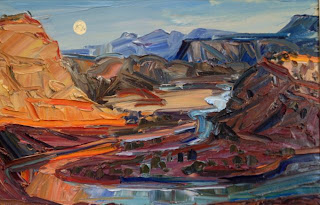 Dad and I saw a collection of Louisa McElwain's paintings at a gallery in Tubac, including this one, which might be her last one. I'll post more paintings and other Tubac scenes next week. 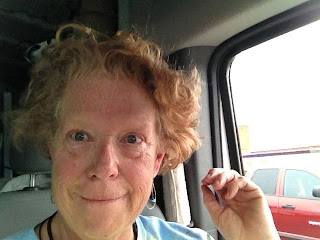 Got my hair cut! 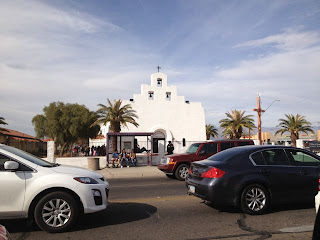 Tuscon is exotic, with palm trees and giant mountains and Spanish architecture - and tons of cars, too. They are not so exotic. 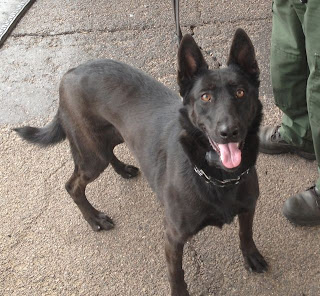 Dog of the Day. She was working at the border-guard checkpoint just up the road from Tubac.