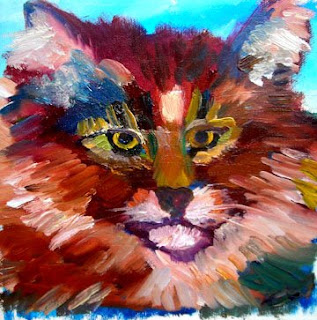 Amos. Oil on stretched canvas.
Sweet old Amos is on his last legs, I'm afraid. He's 18-plus, and suddenly, he's just lost. He's been a little drifty for a few years, but in the past couple days, he clearly no longer knows where he is or what's happening. But he's not in pain, he doesn't seem to be scared. He's just confused and very, very sleepy.

Amos is the last of the oldest crew of pets. Peter and I found him when we lived in Boise. It was November, and night, and raining, a cold, cold rain, and we'd gone to the mall - something we almost never did.

When we came out, we heard mewing from beneath a car, and there was Amos. He was a young cat, maybe a few months old, and he was wet and scared and hungry. We brought him home, just to give him shelter until we could find a home for him - and 18 years later, here he still is.

He walked into the house, walked up to the dogs' food bowl, shouldered them aside and ate. They just stared, amazed. Hours later, he decided that our bichon, Gus, was his mother, and from that moment until he grew bigger than Gus, he sucked on Gus's chest daily. Gus would look at us with an expression of worry and total incomprehension - and let Amos do what he wanted.

Amos spent years climbing, and then strutting up there, high above the ground. It started in Idaho. We looked out the window one day and there was Amos, on a branch 30 feet above the ground. The climbing ended in Maine when, we are pretty sure, he fell off the roof of the barn. He wasn't hurt, and we hadn't seen or heard anything, but for years, we'd seen him up on the roof, and on high branches of the trees - and then, one day, we didn't.

He always staked out posts, though. Everywhere we've lived, Amos claimed a spot for himself. In Standish, Maine, it was beside a little creek that ran through the yard. In Pawcatuck, it was on the stone wall beside the driveway. He'd station himself in these places and stay there for hours on end, no matter what the weather. In Portsmouth, Va., he would duck under the fence and get up on the neighbor's back porch, hang with the cats there and share their food.

He's never been any trouble. He's only been sick once in his life. He's never peed around, or clawed furniture or caused any trouble. For most of his life, he'd go out with the dogs and come in with them. He obeyed commands better than they ever did. He's never asked for much, except for love and a warm place to curl up, and we've given him both, always.

When Amos dies, it will be the end of the pets we had when we married. Gus the bichon is long dead. Najim, the Pekingese; Shatzi, the dascshund-chihuahua; Niobe, the great white cat; Tricksy, her black-and-white nemesis, and Katie, Tricksy's mother, they're all long gone.

Not a day goes by that I don't think of them, or miss them, or treasure the moments I had with them.