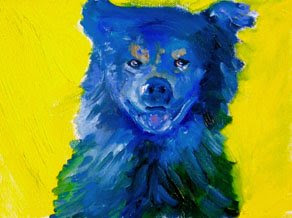 Moxie. Oil on Pintaur panel, 5x8. To be donated to the Connecticut Humane Society, Waterford branch.
For those of you who read my most recent post, here's the real thing. This painting not only looks like Moxie, but - far more importantly in my book - captures the exquisitely gleeful deviltry with which I am sure Moxie approaches life.

Mox is a female chow-German shepherd. She's 5 years, 6 months and three weeks old - and that specificity makes me think that whoever gave Moxie up loved her still. Another thing that makes me think that is that in her photo, she's wearing a bright yellow bandanna.

Growing up, I'd always thought chows were dangerous. They had curly tails, a sure sign of a dangerous dog, in my mother's book.

But then, our daughter Erika went to the Connecticut Humane Society to adopt a Pekingese. She took Peter with her, and he came home smitten by Frank, a big black chow.

We went and got Frank, and he soon showed himself to be a dog among dogs. He was serious and solid, but he had a sense of humor. After we'd had him for far more than a year, we found out that he knew "speak." We also found out that squeaky toys turned him into a huge and ungainly puppy.

Frank could shred a toy faster than any dog I've ever seen. Once, I gave him a toy while we were still in the Wal-Mart parking lot. By the time we'd reached the road, the toy was in pieces.

And when Samantha, our cat, had kittens, Frankie fell in love with Puffy. He watched her and watched her, wagging his little tail so hard that his whole huge body shook. He whined little kitty whines. We were pretty sure Frank thought Puffy was a squeaky toy, and that disaster was looming. But we were wrong. Frankie just loved Puffy, and took care of her, mothering her, playing as gently as could be.

Frank is dead now, but I miss him every day. He was a great dog, and taught me about the nobility and the grace of chows.
By carrie jacobson - March 24, 2009

I came across your blog rather by chance - and was captivated by your weird and charming and wonderful paintings - and also by the wonderful things you write about the animals.