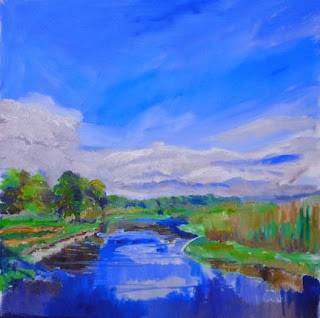 Inlet, Guilford. Oil on stretched canvas, 18x18.
As you drive south on I-95 in Guilford, you see beautiful salt marshes on both sides of the highway. Yesterday afternoon, I set out to find them.

But Guilford, like so much of Connecticut, makes it next to impossible to reach or even see the water. After spending an hour or so driving around expensive cul-de-sac neighborhoods, I found a teeny pull-in beside an overpass, in a stretch of woods at the edge of a salt marsh.

I backed the van in (this took at least 10 forwards and backwardses), hauled my stuff 15 yards or so to the edge of the inlet, and began to paint.

In a while, I heard a rustling in the woods behind me. Headlines flashed through my brain: "Artist killed in plein air". "Guilford strangler strikes again". "Honestly, the painting wasn't THAT bad".

The reality was far more frightening than my lurid imaginings. The rustling stopped, and at my feet, on the path, was a skunk.

The skunk was between me and the van. I was between the skunk and water. The path was about 15 inches wide, and there was no other exit.

So I stood very still, and watched as the skunk made its slow way along. It was looking for food and finding it, sniffing, sniffing, sniffing. It sniffed its way right up to my easel holder, my coffee cup, the cover of my palette box. It sniffed the legs of my easel. It veered a little to the north, and I quietly, slowly, made my way up the path.

But it didn't leave! And why should it? I was in its territory, after all. So I watched it for a while. Honestly, it was a cute and clean little creature, and it didn't smell at all. I think it was a baby. Eventually, it got far enough away that I could pack up without imperiling myself, and so I did. I'm not thrilled with the painting, and so I'm going to go back - and I will have my eye out for the skunk. 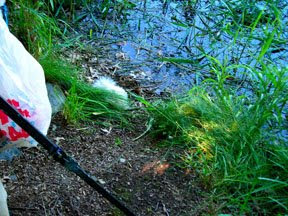 My easel leg is in the front. That little white blob in the middle of the frame is the skunk. It's not a great shot, but I really didn't want to ask him to pose.
By carrie jacobson - June 17, 2009

What a great story Carrie! I know why you were so successful in your past career.

Thanks, Sheila! I am just happy that I didn't shriek when I saw that skunk.