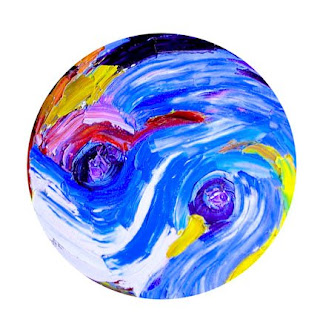 The house where we grew up had old-fashioned ceiling fixtures that looked for all the world like breasts. My mother replaced most of them, but the one in the living room remained.

In time, she got a really cool idea. She took a bunch of marbles and she unscrewed the light fixture, took it off, poured the marbles into it, and screwed it back into the ceiling.

When we turned on that ceiling fixture, the light would shine out through the marbles, in streaks and glints of color. What a great idea!

My mother helped me with one of my great ideas. In our old house in Maine, we had an uneven and saggy ceiling held in place by a grid made of pieces of lath, fastened with long screws to something under the second floor. It was an ugly ceiling, but there really was no replacing it, not unless we had thousands of dollars, and we didn't.

So I employed my mother and her good standing in AAA to get maps for me. Then she held the ladder while I nailed and glued maps in every square on that ceiling. You could lie on the couch and look up at western Montana, northern Vermont, the Rhode Island shoreline. It was great.

I had fun making this round painting. I had fun remembering, too.