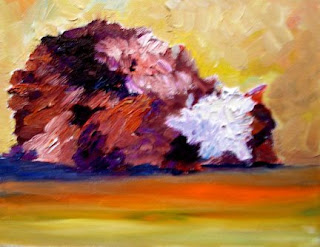 One thing about all this rain is that it forces me out of my comfort zone (the outside world) and down into my basement studio. Puffy, our mean and repugnantly ill-groomed cat, hangs out with me down there, and we've developed quite a friendship.

Puffy is poorly suited to her name. Her mother, a near-feral cat named Samantha, got out of our house in Maine and was too scared to come back. In the time it took us to get a Hav-A-Heart trap and capture Samantha, she'd been knocked up by the neighborhood tom, a surly guy tough enough to survive Maine's winters without benefit of a real home.

Samantha had four kittens, and we gave three away, kept Puffy and had Sam neutered. Frank, a dear and grumpy chow we had at the time, became fascinated with Puffy. We were pretty sure Frank would think Puffy was an hors d'oeuvre, but instead of eating her, he adopted her, wagging his little chow tail whenever he saw her, nuzzling her and generally acting as her protector.

Between the genes she inherited from her tomcat dad and the personality Frank apparently drilled into her, Puffy grew to be a mean, aggressive and disarmingly filthy cat. She never grooms herself, and rolls in whatever dirt she can find. She picks fights with the other cats. She sits at the top of the stairs and keeps the other cats from going into the basement, where the food and litter boxes are.

But she can be very loving.

So now, she welcomes me into her basement with loud purring. For a while, the downstairs couch was her favorite place, and she'd stay there for hours while I painted. Now, in typical Puffy fashion, she has absolutely fallen in love with a DVD/VCR box, and she sits, lays and sleeps on it for days at a time. Luckily for me, it's in the sight line of my current easel set-up.

Thank you for reading!

I am glad that you love Puffy. Cats can be like children they need to learn how to be loved to love. Good thing Puffy has you. I have a cat who scratched and hissed at us us for years. Now she is sweet and loving, an absolute lap cat! Life is good.
Happy painting!