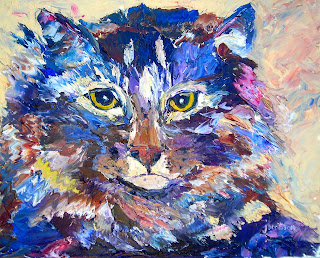 Amos
Oil on canvas, 16x20, $200
My Internet issues continue. Please email me if you would like to buy this painting.
I painted the bulk of this piece Saturday, on the sidewalk in front of Center Framing & Art in West Hartford Center, Conn.

It was a cold day, and windy, too. I hung my paint bag from my easel (a trick I learned while painting on the wind-swept plain in Wyoming), and still, I had to hold the canvas most of the time. Once, the whole arrangement went over, the first time that's happened. Amos landed face-up, though, as he always did in life.

Peter and I were living in Boise when, unusually for us, we went to the mall one rainy November night. It was the only time we ever went there. We were coming out when we heard a pitiful mewing. We looked under a car, and there was Amos, small and bedraggled and pathetic.

We put him down in our house, and he looked at the two dogs, a Pekingese and a bichon, and walked over to their food bowl and began eating.

In short order, Amos decided that Gus, the bichon, was his mother, and he suckled Gus's chest for about a year, stopping only when he, Amos, clearly a Maine coon cat, had grown pretty much as big as Gus.

I've always believed that Amos thought he was a dog. He was their size. He was as strong as them, and as tough. He went out with them, and came back in with them. He ate with them, asked for treats with them, and responded to "Come!" better than they ever did.

He did climb, when he was young. That was his one feline accomplishment, unless you count sleeping a lot. We would look up, in Idaho and later, in Maine, and there would be Amos, on a branch higher than the house. He stopped climbing one day and Peter and I think that he must have fallen off the roof of the barn in Maine. Or, he might have just decided it wasn't worth the effort.

Amos is everything a good cat should be/have been.

His tribute is soulful.

Thanks, Patrice. He was a good guy, a big, slow-moving, kind fellow. He kept the girls in line, too. Now, they just fight all the time.