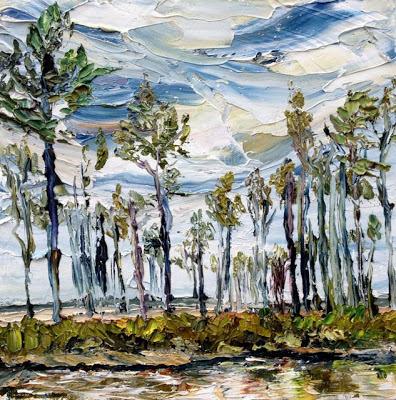 I spent much of the day Monday in and around the Okefenokee Swamp, a gigantic area of pines and palms (primarily), that stretches from Georgia into Florida and back into Georgia, where it meets up with the Suwanee River and the waterways around it.

I saw quite a few alligators in the swamp. The ones I saw were small, but a man who stopped told me there was a 10-foot-long one just down the road.

In the pond that's in the very front of this painting, two alligators lazed on a small hummock that raised above the surface. I don't think they moved for the entire time that I stood there and painted. They were like statues.

The wildlife refuge area was well-maintained and well-used. I saw lots of folks in cars, on bikes and walking, looking at birds and gators and who knows what all.
But I circled around the area as I headed south and west, and really found myself in some places that raised thoughts of "Deliverance." They were pretty, but I sure wasn't going to get out of the car and paint.

I'm sure no one would have done anything to me, but I would have felt awkward and nervous - and who knows? 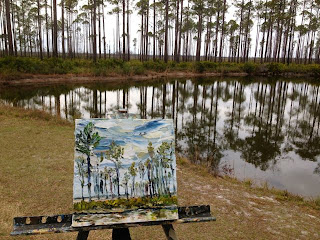 ***
I saw a bunch of animals during the day, including cows and donkeys and, in the field beside the hotel where I spent Monday night, an ostrich! 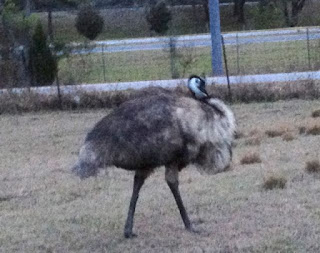 I love what you're doing and I love the painting w/i the picture. Just great!! Joanie (K. Rosen)

Lovely painting! Your journeys are making me long to do a photography road trip!