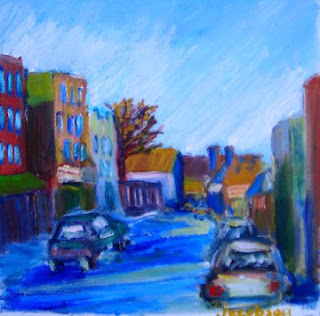 Bank Street. Oil on cradled gessoboard panel. Sold
When I was a kid, Bank Street in New London was a happening place. The Capitol movie theater drew crowds. Marcus's had the best collection of Levi's anywhere. I can still remember the way that store smelled, rich with the scent of never-worn denim and corduroy. Solomon's, which used to be right near Marcus's, had any kind of stationary you could ever want.

If I was feeling brave, I'd go into Caruso's Music and look at the guitars and other instruments. But there were always very, very cool boys hanging around in there, and they all knew how uncool I was, and they would look at me, and this freaked me out. So when I wanted guitar strings or sheet music for the piano, I often just went to the little old guy, again, right near Marcus's. There was never anyone else in there, cool or otherwise.

Olympic Sporting Goods thrived on Bank Street. So did Timmy Conn's leather store. Now, I realize, it probably was a head shop. But Timmy Conn made the most exquisite sandals. Fitted them right to your feet. It took weeks for him to make them, and waiting was part of the thrill.

These days, it looks like Bank Street has a chance. The Capitol still sits empty, and Caruso's has moved around the corner. J. Solomon has a new place, on Bank but farther from State Street. Marcus is still open, and the next time I need a pair of jeans, I am going to buy them there. Timmy Conn's shop is long gone, and I wonder where he is and whether he's still making those beautiful sandals.

The Hygienic has become a savior of Bank Street, I think. So has Rick Waterhouse. Even Book-A-Zine, the adult book store, probably should get some credit. It's been there nearly as long as anyone.
By carrie jacobson - February 22, 2009

Hey Carrie! Neat story and a bouncy happy painting!...sounds like a part of my hometown back in Ohio..