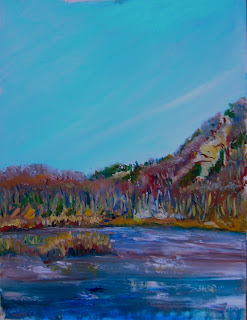 
I went back into this painting and made a series of changes that brought it closer to what I had imagined it could be. I admit, it might be hard to see the changes. I tried putting the two photographs side by side, but the differences in the photographs themselves (the light of today and yesterday, really) were so distracting that I decided against it.

The biggest difference to my eyes is in the ice. I deepened the colors there, painting vertically, and then went over them horizontally, using a palette knife, with a light blue-white. I also lightened the tip-top branches of the trees, and brightened the shoreline. I like the painting much better.

The best part of today was going to Dick Blick's in Plainfield (Plainville?) and buying 45 or so canvases. And why, might you ask, was I buying canvases in such bulk? Because I've got another painting trip in the works.

At the end of March, I'm setting out for Tubac, Arizona. That's where my dad and his wife live when they don't live in Norwich. I've never been to visit them, partly because of my desperate fear of flying, and partly because I never had the time, while I was working. So I will get to see where they live, and spend a little time with them, and paint in another brand-new place.

I like the changes Carrie. 45 canvases!!! I'm so envious but love the fact you've already set such a lofty goal for yourself. HUGS!

SHUT UP!!!!! You are not going on another once in a limetime painting excursion. Dude... I am so wicked jealous. Argggghh if you could see my face right now I look like the wizard of oz witch, that's how green with envy I am.
Whatever...I dont care...arggh please please please please let me go. I can stick my head out the window with the dogs, arghgh turd