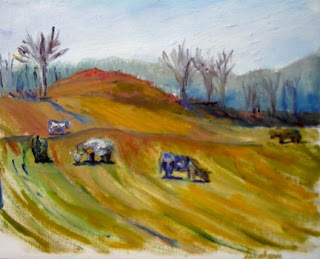 Cows. Oil on stretched canvas, 8x10
Saturday, the day after the opening of "Places You Know," I set out to find some places I didn't know. It started off as a warm day, and I put the top down in the Miata. Heavenly!

I came upon a scene that really intrigued me. Across an open field, at the top of a wooded hillside, was an open field, still with some snow on it - and a tractor sitting, silhouetted, at the very top of the hill.

I made two paintings of this, and neither one captured it. Dismayed but undaunted - failure is OK. It's tiring, but it's a precursor of learning something new, I've found - I set off and drove around the back roads of Preston. The sun went in, and the day grayed.

And just as I was about to head for home, I saw these cows on this gentle, sodden hillside. I think they look like cows, but it's tough to paint a cow at a distance and have it not look like a horse or a donkey. At least they don't look like monkeys.
By carrie jacobson - March 10, 2009

Love the sweeping vista of the landscape. Nice!

You have a convertible Miata?? how cool are you. I am so jealous (I almost bought one in '93 but opted for a Geo-- still drive it).

Yes, the Miata is a joy! It's a 1997, and it's covered with paint, but it runs great, and it's a blast. And good thing we have it, too, as our "real" car, a VW Golf, is in the process of losing its transmission.