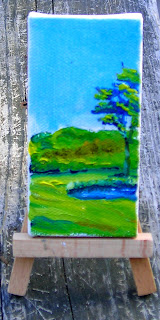 This morning, I loaded up the van with paintings and headed to Center Framing and Art in West Hartford. Sandy, the proprietor, had been more than receptive when I emailed her several paintings last week.

That's putting it a little softly. Honestly, we had the kind of conversation that every artist dreams of having. She loves my work, she said. Loves it. Thinks I have no idea how talented I am, and that I'm selling my paintings for far less than I should be, and that she would like to represent me. So load up the car and bring her some stuff.

That was four days ago, and I was so excited, I was walking on air.

But soon enough, in a syndrome that has plagued me for all these many years, I found myself distrusting my own reaction. I'd never met this person, and she seemed fine at first meeting, wonderful even. But - my mind said - it was possible, or probable, or certain, that she was a nut, or unbalanced, or on drugs or all of the above.

She said she loved my work, but maybe, my brain said, she exaggerates. Probably she does. I'm sure she does. In fact, she's just an outright liar, and I am a stooge for even listening to her, let alone believing her.

She has good connections in Hartford and she knows she can sell my paintings, and for far more than I'm asking. Well, she says she has connections. She probably knows some people. She probably met them when she was in jail for lying, or when she was in the asylum. She was probably calling me from an interrogation room. A padded interrogation room. Or maybe this entire thing is just a huge scam to get me to frame everything in wildly expensive frames.

Between Friday and today, with the help of my own mental imbalances and some well-meaning but distrusting friends, I'd managed to talk myself nearly completely out of my excitement.

But today, that excitement is back, and in triplicate. Sandy is no lunatic. She's no liar. She's no pushover, either, and surely is no phony. She's a delightful woman who runs a lovely, profitable gallery in West Hartford Center, an eclectic and interesting area. She seems to know precisely what she likes, and what will sell. She handled me with absolute aplomb, and with what appeared to be exacting and intelligent astuteness. She made helpful and cogent critiques of my work. Even as she rejected 95 percent of it, she managed to assure me that she believes it all has value, but is not what will sell in her gallery at this moment.

And my brother, who was with me, pointed out that, now, I have four pieces in this warm, well-lighted place.
By carrie jacobson - June 02, 2009

It's always a moment of trepidation, to visit with a new gallery... I sense some good, positive things in here. It sounds like she has a good sense of the market, and your work, and may well be a good guide and mentor, if that is something you are open to.

I might, add, careful what you post, as the gallery owner could find and read it as well.

Thanks, R, for your sentiment and your caution. I tried to write my post to reflect on ME and my insanity. I'll read it again and see if I should revise it. The last thing I want to do is anger this gallery owner.

This is hilarious! I would have done the exact same thing but I'm so happy she's legit and the gallery is lovely. Validation is the sweetest elixir me thinks. It sounds as though this place is nearby Betsy so I will be sure to check it out soon. I can't wait to go painting again with you so I can hear all the details. :)