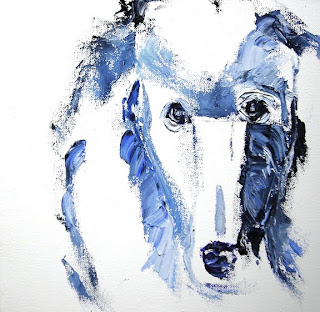 Call me at 860-442-0246 or email me
if you are interested in buying this painting
I don't know if all this is coming from painting in fog all week, but I'm finding myself increasingly interested in the less-is-more concept, at least as it pertains to paint on the canvas.

I began this poodle fully intending to fill the canvas with white and blue and pink and green, and all the colors that one can bring to bear on the coat of a white poodle - but I got this far and fell in love. I think this painting is finished, though there's still the ghost of a chance that I could be persuaded otherwise.

In some ways, this unfinished quality that so tantalizes me has been a quiet undertone of my work since my painting trip to Wisdom, Montana. On that trip, I began leaving the lower edge of some of my paintings unfinished.

Initially, I did that because I just wasn't that interested in what was at the very front of the scene, and thought I would just add some interesting stuff there later. When "later" came, I realized that I like that unfinished edge. It speaks to me of possibility, of the fact of paint on canvas, and raises the question of what is possible - and what someone else might do with that empty space.

Then, on my trip to Arizona, on a day when I'd painted three or four paintings, I started one more, and honestly, left it unfinished because I was just plain exhausted. I took a million pictures of the scene, and vowed to finish the piece when I got home.

Well, I looked at it last week, and honestly, I think it's finished. I might add a little more paint in a few places, but the partial quality of it really intrigues me.

I'd love to hear what any of you think.

I love this!! Gorgeous! Yes, in this case you've captured so much in the less is more! Beautiful, beautiful!!

Thank you so much for your enthusiastic support! Do you think you could tell it is a poodle? I think I can, but then my husband guessed collie, so I'm not sure. At any rate, thanks, maestra!

Gosh Carrie, I got so used to seeing your work on Art for Animals, I didn't realise what I was missing out on insofar as your blog goes! Picked up your comment from R's blog and am so glad I now have you on my blog list. Absolutely wonderful work.

I guessed a greyhound, but I don't think that matters. I love subtraction, figuring out just which lines or marks are essential to convey the idea or object and using just those marks. I guess it's the same as white space in a page layout. Using it instead of filling it. But I think there's a difference between that and leaving something unfinished. This is a finished painting. I'm not a fan of the unfinished edges on some of your other paintings because they interrupt my experience. I am being sucked into this landscape, this moment of light and color when suddenly I am jarred by the edge, oh yeah, it's just a painting...

Thanks, Liz! It's great to see you here on my daily art blog...

And thanks, too, Jill! Greyhound. I see that, too. I, too, love the whole subtraction thing - I like what you say here, and likening it to white space on a page - I know that some of the unfinished edges don't work, and some do - now to understand the when and the why.

Well done, Carrie! I've enjoyed your "fog" series. You've done so much with an economy of strokes and color.

Thanks, Dave. It's always good for me and for my painting, knowing you're out there, calmly reading, looking, thinking -